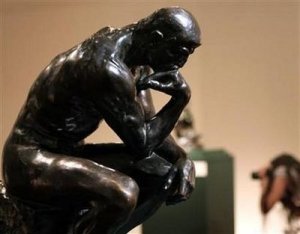 1. Have you ever been walking somewhere only to realize you were going the wrong way? Rather than simply turning around you do something like pick up your phone, tie your shoe, or make some other gesture so people don’t notice.

2. When our Nintendo was acting up, the universal rule was to blow into the cartridge. EVERYBODY knew that. Meanwhile when we have problems today, we can’t do jack without checking on message boards or calling customer service. This new aged technology has taken away our ingenuity.

3. Microsoft needs to create a font to show when we’re joking. The smiley face thing is stupid.

4. Speaking of writing (somewhat), what was the point of learning to write in cursive?

6. Have you ever loved a movie or a CD so much that you were offended if other people didn’t share your enthusiasm?

7. Out of the 1400 songs on my iPod, I’d say that I only listen to about twenty of them consistently.

8. I’m generally pretty cautious on the road. But I’ll admit, I text while I drive. Please don’t pull me over Alan.

9. When people use “LMBO”, “LOL”, or any variants of that, are they really laughing? I’m usually not.

10. Kids who whine about talking naps have NO IDEA how precious that sleep time will get once they start graduate school.

11. Nothing is more humbling and defeating for me than that split second during an argument when I realize I’ve lost.

13. Am I the only one who hates the person in the group who has to remind everybody else that they refuse to eat a certain kind of food (i.e. pork)?

14. I’m not so sure I can criticize R. Kelly for his problem with the kiddies. Nowadays, with the way girls dress and the hormonal/genetic imbalances they have, I can’t tell minors from adults myself.

15. I agree with the dude from “A Bronx Tale” when he essentially said the best way to get rid of somebody you don’t like (well, outside of whacking them, anyway) is to loan them money. Loaning them money usually means you’ll never see them again. A small price to pay in some cases.

16. Am I the only person who still gets nervous during icebreakers when we have to share our name and something about us? I should know these, right?

17. When people are telling me stories with too many details, I get bored easily.

18. Speaking of enduring long and boring stories, why don’t my non-verbal cues every work in getting out of a conversation? Slinging my backpack from shoulder to shoulder, checking my watch/cell phone, taking easing steps toward the door. None of it seems to work with some people.

19. I purposely assign certain people’s numbers with a specific ringtone so I know not to instinctively pick up if they call. I know I’m wrong. But don’t act like it’s just me.

20. I must be the world’s dumbest potential criminal, because even if I had your date of birth, your soc #, and knew your mother’s maiden name, I wouldn’t have a clue what to do with that information.

21. When I meet people online (it’s only been a few times), I have to be careful not to mention something I read on their profile unless they’ve mentioned it first. Otherwise, I look like a creepy internet stalker.

22. I hate when people get in my car and start changing the station or the CD tracks. Is that not the rudest thing on Earth? If I want to listen to Celtic Woman in the car I paid for, that’s what we listen to.