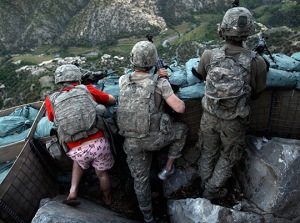 Nineteen-year-old Spc. Zachary Boyd of the 1st Battalion, 26th Infantry, was sleeping when the Taliban attacked his unit in Afghanistan’s Kunar province. Boyd leapt from his bunk. He grabbed his weapon, pulled on his helmet and vest, and manned his station behind sandbags at Firebase Restropo. He did not stop to pull on trousers.

Associated Press photographer David Guttenfelder was embedded with the unit and took a photo from behind: three staunch young soldiers, rifles ready.

That photo is on our Web site. You’ll recognize Spc. Boyd immediately: He’s the one on the left, wearing pink boxer shorts.

Zachary Boyd is from Fort Worth, Texas. He graduated from Keller Central High School and had planned to attend Texas Tech, but enlisted first because, as his mother told the Fort Worth Star-Telegram, he felt his country needed him now.

“I was always telling him to pull up his pants,” Sheree Boyd recalls. “I would give him a wedgie to make him do it. As a mom, you want your son to look nice. But he has always been one to run around in his boxers.”

If Spc. Boyd wasn’t mortified to appear in boxers on the front page of The New York Times, he might be when he hears his mother talking about wedgies.

Sheree Boyd says her son worried that he might lose his job because he was shown out of uniform on the front page of the newspaper that is plopped before the president each day.

But Defense Secretary Robert Gates told a group at New York’s Intrepid Sea, Air, and Space Museum, “I can assure you that Spc. Boyd’s job is very safe indeed. … The next time I visit Afghanistan I want to meet Spc. Boyd and shake his hand. Any soldier who goes into battle against the Taliban in pink boxers and flip-flops has a special kind of courage.”

By the way, the soldiers alongside Boyd are Spcs. Cecil Montgomery of Louisiana and Jordan Custer of Spokane, Wash. They are both wearing pants. But Spc. Custer has no socks and is wearing silver running shoes.

Almost anyone who has spent time with soldiers in the Army that’s come into being since September 2001 has been touched to meet so many young men and women who seem smart, loyal, funny and self-sacrificing. A young soldier in pink boxers may never be cast in bronze. But at the age of 19, Zachary Boyd has already been in at least 200 firefights in Afghanistan.

If he wants to, he can wear a thong.

A part of me hates the fact that it takes stories like this for us to remember our fellow countrymen serving in war. Much like the Jessica Lynches of the world, Spc. Zachary Boyd is likely to become a celebrity in a campaign where there are thousands of other people doing just as many brave and sacrificial things.

But I am also encouraged by scenes like this. Regardless to how I may feel about this damn war, this story is a snapshot of the brave men and women – both alive and dead – who dutifully serve this country. So allow me a second to give them all a much deserved shout out. Here’s to them!